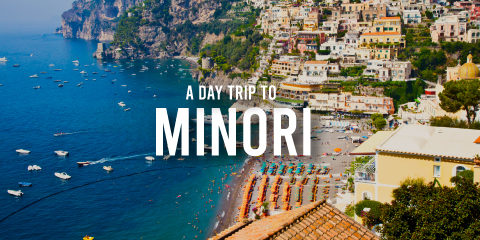 Minori is an ancient fishing village and one of the most enchanting towns on the Amalfi Coast.

The Amalfi Coast has been UNESCO heritage since 1997 and if you have never been there, well, maybe you should plan a day trip!

Towns like Amalfi, Ravello and Minori itself will be able to charm you with wonderful views and excellent cuisine.

Let’s find out more about Minori!

THINGS TO DO IN MINORI

Minori already existed in Roman times, as evidenced by the remains of an ancient Roman patrician residence.

Villa Marittima Romana dates back to the 1st century AD, but it was discovered by chance in 1932 during some building renovations. Another area of the villa came to light in 1954 after a flood.

Nobody knows the name of the owner of the villa. Probably he was a well-known man, certainly rich. In any case, he left us a significant example of roman architecture. Indeed, you can still see the ancient mosaics and frescoes, the garden with pool, thermal baths and fountains.

It’s a marvelous place that allows you to go back to the past.

What we know about St. Trofimena’s life is somewhat uncertain. However, people of Maiori believe that Trofimea’s father killed the young girl when she was just 11 or 12, because she refused to marry a pagan man. Her body was placed in an urn and threw into the sea. Then, the flow drove it to the beach of Minori.

As for St. Trofimena’s Basilica, it is located in the center of Maiori, a few meters from the sea. You will easily recognize it by to its Neoclassic white and yellow facade.

It was built in 1747 after the destruction of the previous cathedral.

Inside the Basilica you will admire a lovely altar embellished with multicolored marble and inlays. The Baroque crypt, which still host the St. Trofimena’s relics, is remarkable too.

GO TO THE BEACH OF MINORI

Minori has a small beach, of which only a minor part is free. On the other hand, the beach clubs offer all the comforts for a nice day outdoor.

Surrounded by the hills of the Amalfi Coast, the beach is a great place for relaxing.

The crystal clear water and the dark sand make it particularly popular. So, don’t be surprised to find a lot of people there during summer days. But it’s worth it!

Sentiero dei Limoni (lit.: the path of lemons) is a long path that connects Minori to the town of Maiori. Moreover, it is one of the most beautiful paths in Italy! Indeed, along it you can enjoy wonderful sea views and discover the terraces where people grow lemons. And lemons give the name to this path, since they are the most local product.

The path, which reaches also Ravello and the tiny village of Torre, is quite easy. However, there are more than 500 stone steps to climb both uphill and downhill! So, be aware!

And if you are too lazy to walk back to Minori, you can take the ferry or the bus.

Minori has a long tradition in the production of pasta. Among the typical dishes are the ‘ndunderi’, similar to gnocchi. And the, lemon tagliolini and the citrus&shrimps risotto.

But during a day trip to Minori, you absolutely have to try a few desserts. The most popular one in all the Amalfi Coast is delizia al limone (lit.: lemon delight). It is a dome of sponge cake with limoncello liqueur and lemon cream both inside and outside. Yummy!

The most famous pastry shop where to taste it is that of the pastry chef Sal De Riso, inventor of the ricotta and pear cake.

Are you planning to visit Minori? Discover our villas on the Amalfi Coast.