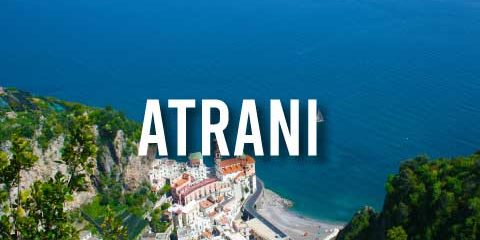 WHAT TO SEE IN ATRANI, AMALFI COAST

Among the many towns and villages on the Amalfi coast, Atrani is the closest to the enchanting Amalfi. So close that it takes a few minutes on foot to reach it. Despite that, it is often overlooked and that’s a pity, since Atrani is classified as one of the ‘most beautiful villages in Italy’.

Two of the main reasons are its position and the atmosphere.

Perched on a cliff overlooking the sea, with its steep streets, narrow alleys and lovely building, the village looks like a real size background for a nativity scene.

WHAT TO SEE IN ATRANI

Although Atrani is a small village, it has preserved its ancient medieval structure with historical buildings and a few interesting naturalistic attractions that are worth a visit.

THE MAIN SQUARE OF ATRANI

Piazzetta Umberto Primo is the main square of Atrani.
Here, people and tourists come to enjoy a coffee, chat or shop.
The square opens towards the sea and is located just a few steps from the beach. The view from here is beautiful.

The square gives its best at night, with the lights on.

The Church of San Salvatore de Birecto is the most important monument in Atrani.
It was built in 940 and then remodeled in the neoclassical style.
It is both a church and a museum. Despite its simple interiors, it stores many artifacts that dates back to the medieval time and to the Roman’s time.

The Collegiate Church of Santa Maria Maddalena is equally unmissable.
This church was built in the 13th century to thank Our Lady after the deliverance from the Saracen pirates. In addition to the beauty of the building, the church is worth visiting for the sea views.

Next to the Collegiate Church of Santa Maria Maddalena is the so-called Masaniello Cave.
The cave is named after Tommaso Aniello, aka Masaniello (1620-1647), a Neapolitan who led the insurrection against the Spanish in 1647 and used the cave as a refuge.

Another cave is the so-called Cave of the Saints.
It is shaped like an irregular quadrilateral and the walls are decorated with Byzantine-style frescoes that date back to the 12th century and depict the four evangelists.

Atrani has its own beach which is a good plus for those who want to enjoy the clear sea water along the Amalfi Coast.
It is a small beach, with black sand, in a very suggestive position just under the arches of the main road.
You can find both beach resort and a small free beach area.

When visiting the Amalfi Coast you cannot miss to explore the local cuisine.

Seafood, fish but also cheese and vegetables are the main products of Atrani.
Pasta is really good too, especially the ‘scialatelli’ and the ‘laganelle‘.
And don’t forget to try one of the many dessert like the ‘bocconotto‘ with cream and cherries, ‘o pasticciotto‘ or the ‘sfusato di Amalfi’!

Atrani is also particularly famous for the lemon liqueur Limoncello that is traditionally served chilled as an after-dinner.

Are you planning to visit some of this charming towns? If yes, why don’t you take a look at  our luxury villas on the Amalfi Coast!