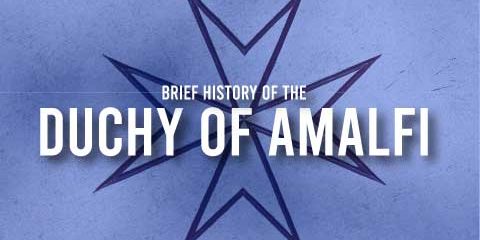 A brief history of the Duchy of Amalfi

Amalfi is a small charming town near Salerno, Italy, which gives its name to the wonderful Amalfi Coast, a UNESCO World Heritage Site since 1997. But the city also has a long and interesting history that we want to share with you.

So, here is a brief history of the ancient Duchy of Amalfi.

THE DUTCHY OF AMALFI

The Duchy of Amalfi was one of the four Italian maritime republics together Venice, Genoa and Pisa. However, it was the first to develop in the 9th century and also the first to collapse around the 12th century.

The origins of Amalfi are still not clear. According to the Chronica Amalphitana, an ancient local chronicle, the first settlement was built around the 4th century by shipwrecked Romans. They called it Melphi.

In any case, the first historical source to mention Amalfi is a letter from Pope Gregory the Great from the early 590s.

THE ORIGINS OF THE DUCHY OF AMALFI

Since ancient times, the Amalfi people have devoted themselves to agriculture, livestock, but most of all to trade. This led to the birth of a landed aristocracy that over time became more and more important and powerful.

In the 9th century Amalfi was a real commercial power, thanks to the exchanges with the Arabs and the Byzantines. However, Sicardo, a Lombard prince, conquered it.

September 1, 839, is an important date for the history of Amalfi. That day, Sicardo was assassinated and the Amalfi people rebelled, driving out the Lombards. Finally independent, the town turns into a self-governing state, the Duchy of Amalfi.

The Duchy of Amalfi participated in the political intrigues of the Italian peninsula. It also joined the Lega Campana, a legacy created by the Duke of Naples to protect the area from Saracen raids.

Indeed, such incursions were becoming more and more frequent, to the point of threatening Rome. For this reason, Pope Leo II asked for help and in 849 the Amalfi and Neapolitan galleys defeated the Saracens in a naval battle at the mouth of the Tiber river.

Meanwhile, Amalfi continued to trade with the Arabs and Byzantium. More over, its citizens became settlers scattered between Byzantium, North Africa, and even Jerusalem.

THE DECLINE OF THE DUCHY OF AMALFI

Unfortunately, at the beginning of the 11th century Amalfi began to suffer the rise of the Normans. Also, the Duchy of Salerno was getting stronger. Thus, to defend itself, the Duchy of Amalfi allied with the Normans. Eventually, it lost its independence in 1139, when the Norman Roger II became the sovereign of southern Italy.

Roger II protected the commercial activities of the Amalfi people, however cutting the town’s ties with Arabs and Byzantines.

Gradually the town became less and less important, both militarily and economically. In 1343 a landslide sank the port and the shipyard. Then, in the 15th century, with the Aragonese domination, the Catalan merchants arrived, definitively outclassing the Amalfi fleet. Moreover, plagues and pirates led the inhabitants to abandon the area, which was increasingly poor.

Finally, in 1807 Giuseppe Bonaparte, king of Naples and Spain, visited the kingdom of Naples and fell in love with the beautiful landscape of the Amalfi Coast. Therefore, he decided to build a large coastal road to easily connect the capital Naples to the Amalfi Coast. The road was inaugurated only almost 50 years later. However, it was the beginning of a new era for Amalfi, which became a tourist destination appreciated by artists and nobles from all over the world.

And it is still so today.

Are you coming to Amalfi? Discover our luxury accommodations on the Amalfi Coast!