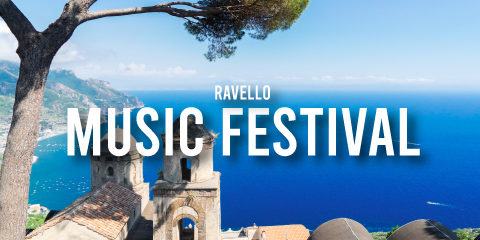 Every spring is time for the Ravello Music Festival. This festival is dedicated to classical music but also includes cinema, literature and art events.

ORIGINS OF THE RAVELLO MUSIC FESTIVAL

The first edition dates back to 1953, as a natural consequence of previous music initiatives.

In fact, in the 1930s the orchestra of the Teatro di San Carlo of Naples performed at Villa Rufolo, playing pieces by Wagner. One of these concerts was also attended by the Princes of Piedmont. For this reason the town of Ravello dedicated the Belvedere of Villa Rufolo to the Princess. Now the Belvedere is one of the most popular viewpoints not only in Villa Rufolo but in the entire Amalfi Coast.

The beauty of those concerts was so strong that 20 years the town of Ravello established the Ravello Music Festival. At the same time, the organizers decided to create the large hanging stage that still fascinates so many spectators today.

THE GUESTS OF THE RAVELLO MUSIC FESTIVAL

The official site of the Ravello Music Festival mentioned some of the artists who join the festival over the decades:

– chamber ensembles: the Chamber Orchestra of Europe, the Camerata Academica del Mozarteum of Salzburg, the Trio of Trieste, the Quartetto Italiano;

WAGNER AND THE GARDENS OF VILLA RUFOLO

In fact, the famous composer visited Ravello in 1880. During his trip, he was amazed by how similar the gardens of Villa Rufolo were to the Klingsor gardens that he imagined during the creation of his famous opera Parsifal.

The admiration was such that the composer left an autographed dedication in the guest book of the guesthouse where he stayed, saying “Klingsor’s Magical Garden is found”.

VILLA RUFOLO AND THE CONCERT AT DAWN

Villa Rufolo is one of the main attractions in Ravello.

Even though it has medieval origins, in the mid-nineteenth century the building was completely in ruins. Then, a Scottish Lord, Sir Francis Nevile Reid, saw it and decided to buy it. He restored the villa and arranged the garden, transforming them into the enchanting place of today.

However, among all the scenic spots in the gardens of Villa Rufolo, one is particularly important for the Ravello Music Festival: the hanging stage.

This stage is on a natural terrace and sticks out above the sea. Behind is the spectacular Gulf of Salerno.
The stage and the breathtaking panorama are the backdrop to the Concerto at Alba (lit: Concert at Dawn), an evocative concert that begins when it is still night. Then, classical music accompanies the sunrise, inspiring emotion and wonder in the spectators. Absolutely unmissable!

Are you coming to Amalfi? Discover our luxury accommodations on the Amalfi Coast!