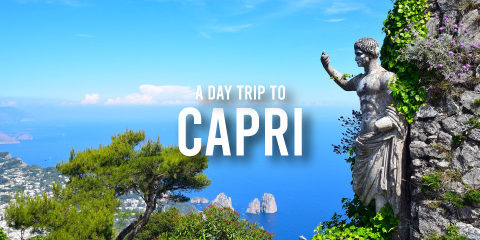 A day trip to Capri

One of the most beautiful tourist destinations in Italy is Capri, considered the queen of the Flegrean Islands.

Located in front of the Sorrento peninsula and close to the famous Amalfi Coast, Capri means chic holiday, but it’s also a place of natural beauty.

Capri; a day trip off the coast of Naples

The proximity of Capri to the mainland makes it perfect for even a day-trip visit.

Here are some tips on what to do on the island.

The Faraglioni are 3 large rock formations that stand out of the sea. They are one of the symbols of Capri and the entire Gulf of Naples.

The name “Faraglioni” derives from the Greek “pharos“, which means “lighthouse”. This is due to the fact that people used to lit large fires on the top of these rocks to show the route to sailors.

Each of the them has its own name.
Saetta is the closest to the mainland. The central one is Stella, which has a natural cave that can be crossed by boat. The last one is Scopolo. Then, there is also a fourth stack, called Scoglio del Monacone, just behind the others.

Remember that you cannot land on the Faraglioni. After all, the best way to enjoy them is taking a boat tour around the island.

During a day-trip to Capri you cannot miss the Blue Grotto, Grotta Azzurra, its main attraction.

The name derives from the color of the water inside the cave; an intense blue, which seems to be illuminated by underwater light.

The cave is 25 meters wide and 60 meters long, but the peculiarity is that its entrance is less than a meter high. Indeed, the most typical way to visit the Grotta Azzurra is by boat, but you have to lie down to enter it!

If you prefer, you can reach the Grotta also on foot from Anacapri.

This is the villa that Emperor Tiberius built in the 1st century BC in honor of Jupiter. It represents a great example of Roman architecture.

The complex is 7 km2 wide and includes the remains of buildings, mosaics, statues, marbles and decorations. Added to this are terraces, gardens and an ancient lighthouse. As you can immagine, visiting Villa Jovis is like taking a leap into ancient history.

However, one of the best features of Villa Jovis is its location. It is on a promontory from which you can enjoy an incredible view of Ischia, Procida, the Gulf of Salerno and the Cilento coast. Furthermore, it is located right in front of the protected area of Punta Campanella.

You can reach Villa Jovis on foot, following an uphill road that starts from the Piazzetta di Capri. It takes about 45 minutes.

The Piazzetta of Capri

If during your day-trip to Capri you want to stop for a coffee in the Piazzetta.

Its real name is Piazza Umberto I, but everybody calls it Piazzetta, “little square”, because of its small size. Nevertheless, it is the mundane center of the island; it’s quite common to come across some VIPs.

Various streets branch off the Piazzetta. The most popular is Via Caramelle, the luxury shopping street.

The Beaches of Capri

Since Capri is a rocky island, you won’t find the classic sandy beaches, but stony coves and cliffs. However, the water is one of the most beautiful in Italy; very clear with blue-green reflections.

The two main beaches in Capri are Marina Grande and Marina Piccola.

Marina Grande is a stony bay and, as the name suggests, the largest beach on Capri. Typical of this beach are the colorful houses overlooking the blue water.

On the opposite side of the island is Marina Piccola. It consists in two beaches; Marina di Mulo and Marina di Pennauro. And it’s said that the rock that divides the two beaches is the one where the sirens of Homer’s Odyssey used to sit.

Anacapri is the largest town on Capri, and one of the quietest areas on the island. It’s located on the slopes of Monte Solaro and can be reached by bus from Marina Grande.

The main attractions are the colorful lanes adorned with flowers, the Church of San Michele Arcangelo and the Red House, which hosts a permanent exhibition of paintings and archaeological finds.

From Anacapri you can then easily reach Punta Carena and the Lighthouse, from which is possible to admire the sunset over the sea.