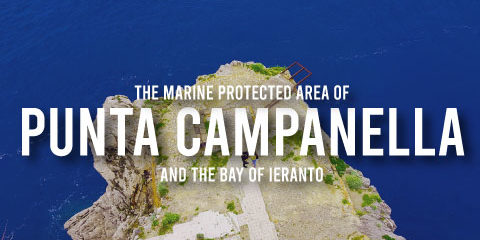 At the end of the Sorrento peninsula is the protected marine area of Punta Campanella.

This is one of the most beautiful places near the Amalfi Coast for several reasons. First of all, the geographical conformation and the climate favored the settlement of many species of plants and animals. Then, there are only a few villages, so the natural environment is still intact. Finally, people can explore it only on foot following a panoramic path that offers splendid views of the sea and the island of Capri.

Then, the Greeks built a temple to Athena in the area, which the Romans transformed into a temple to Minerva. Subsequently, in 1300, the sovereign Robert of Anjou built a watchtower on the ruins of the temple. The name of the tower was Torre Minerva and was used to control the arrival of any dangerous Saracen ships. On its top there was a bell to ring in the event of an alarm. The name of Punta Campanella derives from that bell – ‘campanella’ in Italian.

If you are planning a holiday on the Amalfi Coast, you should definitely add a day trip to Punta Campanella to your bucket list.

PUNTA CAMPANELLA AND THE BAY OF IERANTO

THE PATH TO PUNTA CAMPANELLA

The path to Punta Campanella starts from Termini, the last inhabited village of the Sorrento peninsula. If you like walking, you will be happy to know that it is part of a longer path, called Path of Atena, which connects Punta Campanella to Monte San Costanzo.

From Termini to Punta Campanella it takes about an hour and it is suitable for everyone.

At a certain point the path forks. One direction leads to Monte San Costanzo, the other one to the ruins of the Temple of Minerva and Torre Minerva.
If you decide to reach the Tower, there is a cliff right next to the building that hides numerous caves. Among these, the Grotta delle Sirene is one of the best.

THE BAY OF IERANTO

The Bay of Ieranto is perhaps the most beautiful part of the entire marine protected area, also because it is located right in front of Faraglioni, the spectacular stacks of the island of Capri.

In ancient times, the Greeks, the Romans and the Saracen pirates frequented the Bay. Then, the inhabitants of the Sorrento peninsula opened a limestone quarry that remained in business until the 1950s. But today the bay is a refuge for those who love nature and outdoor activities. Here it is in fact possible to practice bird watching, trekking, kayaking and snorkeling.

To preserve its beauty and the untouched nature, people can reach the Bay of Ieranto only on foot. Boats cannot enter the bay.

Thinking about visiting these beautiful places? Take a look at our luxury holiday homes on the Sorrento Coast!