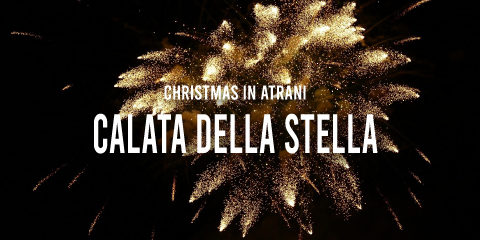 Christmas is coming and of all the traditions that can be enjoyed on the Amalfi Coast there is one that is truly spectacular. It is the Calata della Stella in Atrani.

Atrani is a small fishing village on the Amalfi Coast, located in the center of a river valley and nestled between steep cliffs.

It is a very small municipality, the smallest in Italy, and only 800 people live there. However, it is very picturesque and therefore visited by many tourists during the summer season. This is due especially because of its small beach next to the scenic arched bridge.

The origins of Atrani are still unknown, but we are sure that together with nearby Amalfi it became a thriving town, at least until 1343. That year a tsunami submerged much of the coastline and the two towns, already tried by constant enemy incursions, declined.

Today, there are several interesting monuments to visit in Atrani. One is the Church of San Salvatore de’ Birecto, built in the 10th century, which Baroque facade is recognizable by the clock and the staircase. Another beautiful building is the Collegiate Church of St. Mary Magdalene, with a Rococo-style facade (which is very rare in that area) and recognizable by the domes covered with colorful majolica tiles.

THE CALATA DELLA STELLA, OR THE DESCENT OF THE STAR

Christmas in the towns of the Amalfi Coast is truly enchanting! Each of them is a riot of Christmas lights  reflecting on the water, sweet smells floating around and fun events for children and adults. Among the must-see is the Calata della Stella in Atrani. A tradition that is more than 130 years old.

Calata della Stella takes place on the night of December 24. For the event Atrani is all lit up with colored lights so that it recall a giant nativity scene. The streets are packed with people watching a powerful show of fireworks, which are launched from different points.

When 11:45 p.m. arrives, a star-shaped artifact, lit by other small fireworks, is launched from a high point along a wire stretched above the town, reminiscent of the shooting star that announced the birth of Jesus. In the meantime, Christmas music plays in the background and as the star makes its path the fireworks show goes on louder than ever.

That of the Calata della Stella is an event which both locals and tourists love. In fact, if you want to see it, be prepared to have a hard time finding parking! Nevertheless, we assure you that it is worth it. It is truly one of the most unforgettable moments of Christmas on the Amalfi Coast.

Do you want to visit Atrani and the other towns during Christmas? Discover our luxury villas on the Amalfi Coast.