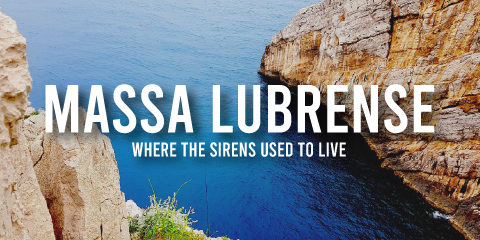 Massa Lubrense, where the Sirens used to live

On the Sorrento peninsula, on the border with the Amalfi Coast, there is the small municipality of Massa Lubrense.
The municipality is located right at the end of the peninsula, in front of the island of Capri, therefore its territory overlooks both the Gulf of Naples and the Gulf of Sorrento.

This particular position offers visitors spectacular views, trails surrounded by lush nature and enchanting beaches.
Moreover, it is an excellent starting point for exploring nearby towns, such as Sorrento, Vico Equense, Praiano or Positano.

Yet it is little known to tourists.

Massa Lubrense consist of 18 hamlets, including Sant’Agata sui due Golfi.

Among the things worth visiting is the 5 centuries old Cathedral of Santa Maria delle Grazie.  Although the external appearance is very simple, the interior floor is decorated with such colorful majolica that is more reminiscent of a noble palace than a church.

Another beautiful church is the one of the Madonna della Lobra, from which Massa Lubrense takes its name.  Not far from the church is Marina della Lobra, the small port. It is located in a natural inlet and it is very picturesque thanks to the local architectural style of the buildings.

In front of the port of Marina della Lobra is the rock of Vervece.  Every September a particular Mass takes place on the rock that the inhabitants and visitors follow from the boats.The celebration ends with the suggestive placing of wreaths on a statue of the Madonna placed on the seabed at about 11 m deep. It is the way locals remember all those who disappeared at sea.

TRAILS AND BEACHES OF MASSA LUBRENSE

For those who love walking, in Massa Lubrense there are more than 100 km of trails. There are itineraries of all kinds and for every level of training.

However, the main features of the territory are the sea and the beaches.
Consider that the municipality of Massa Lubrense has been awarded the Blue Flag for 8 consecutive years. If you don’t know, the Blue Flag is an award for the quality of sea waters, the maintenance of the coastal strip, the efficiency of services and the safety measures.

So, are you wondering about which are the best beaches in Massa Lubrense?
Well, on the side of the Gulf of Naples there are Marina di Puolo, Marina della Lobra, Fontane, the Baia delle Sirene (Bay of the Sirens) and Cala di Mitigliano. On the side of the Gulf of Sorrento there are the Bay of Ieranto, Marina del Cantone, Recommone and the Crapolla Fiord.

THE BAY OF JERANTO AND PUNTA CAMPANELLA

The beaches and the coast of Massa Lubrense and the nearby villages are part of the Marine Protected Area of Punta Campanella.

Inside the area, right in front of the stacks of Capri, is the Bay of Ieranto.
According to Pliny the Elder, it was exactly where Ulysses, the protagonist of the odyssey, met the Sirens.

The Greeks, the Romans and even the Saracen pirates used to frequent the Bay of Ieranto. Then, locals used it as a mock limestone quarry until the 1950s. Now the bay is one of the most beautiful spot in the entire Sorrento peninsula thanks to its unspoiled nature.
If you love nature, trekking, bird watching, kayaking, snorkeling, you should definitely visit it.

Remember that you can reach the bay can only on foot. Boats cannot access the bay.

Do you want to visit Massa Lubrense? Take a look at our luxury holiday homes on the Sorrento Coast!