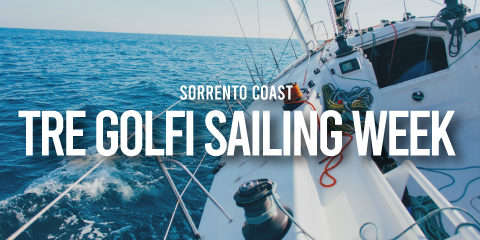 The Amalfi Coast, the Sorrento Coast and the Gulf of Naples are among the best places in the Mediterranean for sailing. Indeed, numerous competitions and events takes place here. One is the Tre Golfi Sailing Week.

This year, from May 14 to May 21, Sorrento will host the inshore regattas of the Tre Golfi Sailing Week.
This is a historic event organized by the Circolo Remo and Vela Italia with the collaboration of the Italian Yacht Club of Genoa and the Royal Yacht Club Canottieri Savoia of Naples. It is supported by the Italian Sailing Federation, under the supervision of IMA and ORC.

The organizers have announced that the event has already exceeded 110 subscribers. In particular, the Maxi European Championship broke the record with 28 yachts. It had never happened before to have so many contestants!

Among the contestants, the largest one is Arca: 30 mt x 5 mt. Its previous name was Skandia and it won the Sydney Hobart in 2003 and the Barcolana in 2005.
If Arca is a veteran, Pier Luigi Loro Piana’s new My Song, 80 feet, is at its first season.
Also worth mentioning are Lyra and Frers 78 of Canadian Terry Hui, which has triumphed at the Rolex Cup in Porto Cervo for years; Ryokan 2 and Farr 80 by the French Philippe Ligier; Highland Fling and Reichel / Pugh 82 by Lord Irvine Laidlaw.

However, the favorites include Peter Dubens’s M72 North Star and Sir Peter Ogden’s M74 Jethou with America’s Cup Brad Butterworth on board.

Do you want to sail in the Gulf of Naples? Book a stay in one of our Luxury Villas in Sorrento