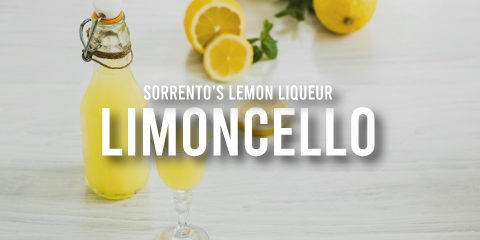 Limoncello is the typical liqueur of Sorrento and of the Amalfi Coast, and is also one of the most famous Italian spirits in the world.
Its strong lemon scent, bright color and sour and sweet taste make it an excellent after-meal. Moreover, it is also a good digestive!

Let’s find out more about Limoncello.

As often happens, the origins of the Limoncello liqueur are uncertain.
According to Federvini, the Italian association of producers, exporters and importers of wines and other beverages, Limoncello dates back to the early 1900s.
At the time, Mrs. Maria Antonia Farace ran a small pension on Isola Azzurra. In the garden she grew oranges and lemons, which she then used to make a liqueur.

After the war, her grandson opened a bar that became famous for the lemon liqueur he made following his grandmother’s recipe.

Then, in 1988, his son started a small artisan production of Limoncello and registered the brand.

Despite this, there are many other legends about the origins of Limoncello. Some are about fishermen, others about nuns and convents. Some people even think that the liqueur was already produced at the time of the Romans, who knew the cultivation of lemons, as evidenced by the remains of Pompeii.

In any case, the first written traces that speak of the Limoncello liqueur date back to the 17th century.

THE PRODUCTION OF LIMONCELLO

Limoncello is the result of maceration in ethyl alcohol of lemon zest and, sometimes, of other citrus fruits.

Generally, each liter of alcohol requires the zest of 10 large lemons. In this regard, the real Limoncello is produced only with lemons from Sorrento or Amalfi, which h.

The maceration period may change, depending on the recipe. In any case, after the maceration, the liquid is mixed with a syrup of water and sugar (usually 600-700 gr of sugar per liter of water).

After that, the liqueur is filtered, bottled and left to rest for at least a couple of weeks.

Why don’t you try making your own lemon liqueur? It doesn’t matter if you don’t have Sorrento or Amalfi lemons!

Here, the first recipe you can follow to prepare homemade Limoncello:

You find the second recipe in the video down below.

Do you want to visit Sorrento? Take a look at our luxury villas on the nearby Sorrento Coast.