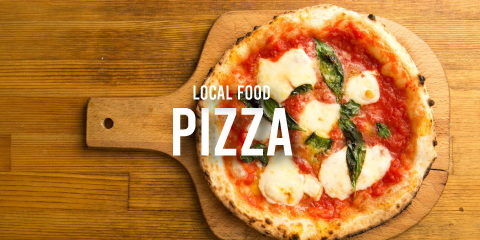 Pizza: from Naples and Tramonti to the rest of the world

Do you know that the small town of Tramonti, on the Amalfi Coast, is considered the capital of Pizza? The most worldwide famous Italian dish was invented in Naples, but in Tramonti they prepare a different -but still tasty- version.

Pizza consists of a flatbread typically topped with tomato sauce and mozzarella cheese and baked in an oven. It can also be topped with other ingredients such as meat, vegetables, or fish.

Another certain thing is that Margherita pizza  was invented in Naples, in 1889, by Raffaele Esposito in honor of Queen Margherita of Savoy and the Italian flag.

Then, after the Second World War, more than 3000 pizza maker left the town of Tramonti to emigrate to Northern Italy. They opened their pizzerias and this dish became popular all over the country.

WHAT MAKES THE PIZZA OF TRAMONTI DIFFERENT

The authentic Tramonti version is made with typical local ingredients, such as mozzarella from the Lattari Mountains, local varieties of tomato, and olive oil produced in Salerno. In addition, it is made with wholemeal flour. Finally, the cooking temperature is lower and never exceeds 350°C. The result is a tasty but digestible dish.

THE TOWN OF TRAMONTI

The small town of Tramonti lies on the Amalfi Coast, halfway between Naples and Salerno, at an altitude of 400 meters. The territory includes 13 villages and numerous historical buildings, such as convents, castles, churches. It has about 4000 inhabitants and it is famous for the production of wines, handicrafts, and -of course-  pizza.

You may not know it but according to some the Tramontana wind owes its name to the town of Tramonti. The name would have spread thanks to the compasses. The Amalfi people were the first to use them, but compasses did not indicate the cardinal points but the winds.

Do you want to visit Tramonti?  Discover our luxury villas for rent on the Amalfi Coast.