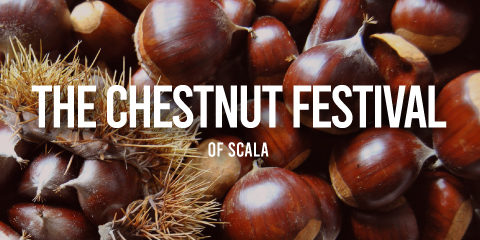 The Chestnut Festival of Scala

Do you like chestnuts? Do you love autumn? Excellent! Every year, in Scala, the oldest village on the Amalfi Coast, 2 km away from Ravello, the right festival is held for you: the Chestnut Festival.

For the local population, the chestnut harvest is important both from a social and economic point of view, and the festival celebrates this moment. For visitors, it is an opportunity to discover the Amalfi Coast outside the most touristic paths, and a local cuisine that deviates from the more famous local dishes.

THE CHESTNUTS HARVEST IN SCALA

Like the grape harvest, the chestnut harvest also involves the whole population, from the elderly to children. During breaks, everyone settles down among the chestnut trees for a packed lunch or a chat, surrounded by the views of the mountains of the Amalfi Coast.

Chestnut groves are generally centuries-old groves and are a true paradise for anyone who loves autumn atmospheres and, above all, chestnuts.

Indeed, chestnut is an incredible fruit, rich in nutrients, so much so that in the past it was central to the diet of the local population. Even today, its uses in the kitchen are several: from chestnut flour to roasted chestnuts, and boiled chestnuts as an accompaniment to meat.

Unfortunately, for a long time the inhabitants of Scala have been fighting against the Dryocosmus kuriphilus, an insect that attacks chestnut trees. They have not yet found a solution so production collapsed, causing economic damage. In fact, the chestnut is important for the finances of families since many inhabitants of Scala have seasonal jobs, linked to summer tourism, and the harvest and sale of chestnuts allows them to increase their income to cope with the winter.

So, the Chestnut Festival of Scala serves to promote the fruit, support producers and encourage the conservation of traditional harvesting techniques.

THE CHESTNUT FESTIVAL OF SCALA

Every October, for two weekends, the town of Scala organizes the Chestnut Festival, during which people can participate in all kinds of events: conferences, games, tastings and more.

Of course, there is no shortage of food stands! We suggest you to taste the chestnut flour gnocchi, the meatloaf and the countless desserts: biscuits, pies, cannoli, etc.

Among the funniest events of the Scala Chestnut Festival there is certainly the donkey race. And then, the Palio delle Contrade: a tournament that includes traditional games (for example, the sack race or tug of war) in which teams of young people from the six local districts participate. Finally, shows and concerts enrich the evenings.

If you want to participate (and we highly recommend it) this year the Chestnut Festival of Scala will take place on the 14th, 15th, 21st and 22nd of October.

Do you want to visit Scala and enjoy the Chestnut Festival?  Discover our luxury villas for rent on the Amalfi Coast.

The Sirenusas, or the Li Galli archipelago off the Amalfi Coast
17 October 2022