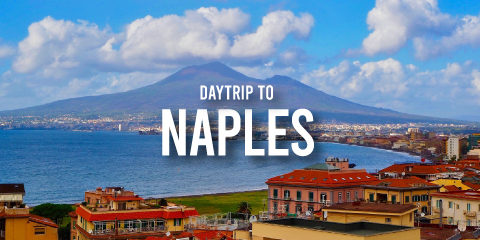 The Best Things to Visit During a Day Trip to Naples

Situated on the Gulf of the same name, the city of Naples is famous for its stunning coastal views with the profile of Mount Vesuvius. But it is also home to some of Italy’s most important historical landmarks, both in town and out of town.

In this article, we are going to tell you some of the best things to visit during your day in Naples.

BEST THINGS TO VISIT DURING A DAY TRIP TO NAPLES

A day trip certainly does not give you enough time to visit all the wonders that Naples hides. For this, you need to make a selection. Fortunately, most of the tourist attractions are located in the historic center, which is relatively compact and easy to explore on foot.

Naples’ historic center is a UNESCO World Heritage Site and it is easy to see why: the streets are full of beautiful buildings, churches, and monuments. And, of course, there are plenty of pizzerias, cafes, and gelaterias to keep you fueled as you explore.

Some of the must-sees in Naples’ historic center include:

The Cathedral of Santa Maria Assunta is one of the most important religious buildings in Italy. It was built in the 13th century in Gothic style and it has a beautiful mosaic façade.

This is the oldest castle in Naples and it is located on an island in the Bay of Naples. The castle has a long and eventful history, having been built by the Romans, used as a fortress by the Byzantines, and serving as a royal residence under the Bourbons.

This is one of the main squares in Naples and it is home to some of the city’s most important landmarks, including the Royal Palace and the San Carlo Opera House. Around the square there are numerous neoclassical buildings which add to the charm of this spot

This beautiful church in the historic center of Naples was built in the 14th century. It is notable for its Gothic façade and its stunning majolica tiled cloister.

Also known as Maschio Angioino, this is the main castle in Naples. It was built in the 14th century by Charles of Anjou and it has a distinctive cylindrical tower. Today, it houses the city’s history museum.

The Church of San Domenico Maggiore

This is one of the most important churches in Naples and it is home to the tombs of several famous Neapolitans, including the composer Giovanni Paisiello.

The Chapel of San Severo

This baroque chapel is home to the Veiled Christ, a marble sculpture by Giuseppe Sanmartino that is considered one of the masterpieces of Neapolitan art. The sculpture portrays Christ covered by a translucent veil that looks real thanks to the unbelievably perfect details.

This is one of the most important museums in Italy and it houses some of the best-preserved Roman artifacts in the world, as well as an extensive collection of Egyptian antiquities.

The Catacombs of Naples

The Catacombs are a 2 km network of underground tunnels and chambers that were once used as burial grounds. They date back to the second century AD and now they are open to the public.

BEST THINGS TO DO OUTSIDE OF NAPLES’ HISTORIC CENTER

If you have the opportunity to stop for several days in Naples you will not only be able to visit its historic center for good, but also explore the surrounding area. Here are the best things to visit outside Naples.

Pompeii is one of the most famous archaeological sites not far from Naples. As you probably may know, in 79 AD Mount Vesuvius erupted and covered Pompeii with a large layer of ash which then turned into rock, keeping inside the remains of the city and its inhabitants until the discovery of the town in the 18th century. Today you can visit its ruins, many of which are exactly as they were 2000 years ago.

Herculaneum shared the same fate as Pompeii during the 79 AD eruption. Unlike Pompeii, however, the discovery of Herculaneum came later and much of it is still buried.

The Island of Capri

Another popular day trip from Naples is to the island of Capri. This beautiful island is home to stunning beaches, picturesque villages and the incredible Blue Grotto.

Do you want to visit Naples and the surrounding area?  Discover our luxury villas for rent on the Amalfi Coast.

Ghosts, monsters and curses; the mysteries of the Sorrento Coast
7 November 2022