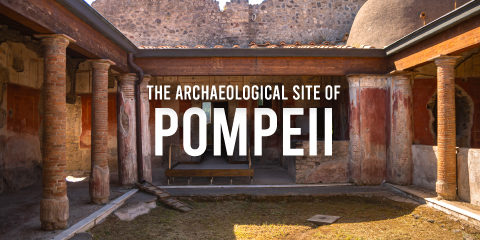 Visiting Pompeii: from the eruption to the archaeological site

Not far from the Amalfi & Sorrento Coast is one of the most incredible sites of the world: Pompeii.

In one way or another, everyone has heard of it. In fact, this small ancient town at the foot of Mount Vesuvius was the protagonist of one of the biggest catastrophes which remains are still visible today in a fascinating archaeological park.

Pompeii was founded around the 7th century BC by the Oscans, an ancient Italic people. It soon became an important commercial center thanks to its strategic position: Pompeii controlled the sea route between Cumae and Nola, two other large cities of Campania. In 80 BC it came under Roman rule but continued to maintain a certain degree of autonomy.

Pompeii flourished during the first two centuries AD, reaching a population of around 20,000 inhabitants. Unfortunately, this all changed on the morning of August 24th, 79 AD, when Mount Vesuvius erupted. The eruption lasted for 18 hours and covered Pompeii with a layer of ash and pumice up to six meters deep.

The town was completely buried and abandoned, its inhabitants dead. It remained forgotten until its rediscovery in the 16th century.

Nowadays, Pompeii is one of the most popular tourist destinations in Italy. Every year, millions of visitors come to see the ruins of this ancient town.

WHAT CAN YOU SEE AT THE ARCHAEOLOGICAL SITE?

The archaeological site of Pompeii covers an area of 66 hectares and is one of the largest in the world. During a visit you can see perfectly preserved houses, temples, public baths, shops, and even a theater.

In addition to the ruins, there is also a small museum on site with some of the most interesting finds.

The Pompeii archaeological site is divided into nine sections, each of which has a different focus.

The most important section is the central area, where you can find the main streets (decumanus and cardo), the forum, and the market. This is also where most of the public buildings are located, such as the basilica, the temple of Jupiter, and the baths.

If you’re interested in domestic architecture, you should visit the residential area, located in the northern part of Pompeii. This is where you’ll find some of the best-preserved houses, with beautiful frescoes on the walls.

One of the most famous buildings in Pompeii is the Villa of the Mysteries, a large private residence with an impressive garden. The villa gets its name from the mysterious frescoes in one of its rooms, which are still being studied by scholars.

The southern part of Pompeii is home to the so-called “Suburban Area”, where you can see some of the largest houses in the city, as well as the amphitheater. This is also where you’ll find the entrance to the Pompeii archaeological site.

THE BODIES OF POMPEII

The remains of the town aren’t the only thing that remains of that tragedy. The eruption of Vesuvius was so intense that people could not escape from the pyroclastic cloud.

Their bodies were suddenly covered with layers of ash which, over time, turned into rock. When the bodies eventually decayed, they left voids in the rock, which archaeologists filled with plaster or cement and water. The resulting casts still show today the exact shape of the victims in their final moments. It is a sad but mesmerizing sight.

The bodies of Pompeii are now on display in the Archaeological Museum of Naples, which is located just a few kilometers from the site. The museum houses over 600 casts of victims, as well as numerous artifacts found in Pompeii.

If you are interested in history or archaeology, a visit to Pompeii is a must. This unique place allows you to get an idea of what life was like in Roman times.

Are you planning to visit Pompeii in Italy? Discover our luxury villas on the Amalfi Coast.