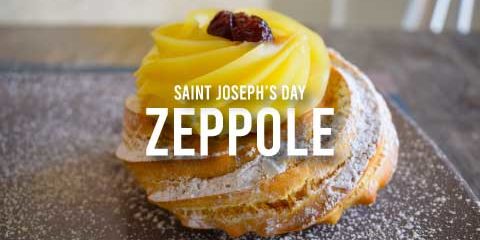 In Italy, March 19 is St. Joseph’s Day and also Father’s Day. For these reasons, in many towns, especially in South Italy, people usually prepare special pastries called Zeppole di San Giuseppe.
Among all the different versions, those from the area around Naples, including the Amalfi Coast, are particularly popular.

Zeppole di San Giuseppe are choux pastry donuts decorated with custard, a sour cherry on top and a sprinkling of icing sugar.

Their origins are not clear.

According to some, they derive from the wheat pancakes that the ancient Romans used to prepare during the Liberalia (500 BC). The Liberalia were celebrations dedicated to the divinities dispensing wine and wheat and they fell every March 17th.

For others, the Neapolitan nuns invented these pastries. In any case, the first written recipe dates back to 1837, but Zeppole became popular only in the the early 19th century, thanks to a Neapolitan baker, Pasquale Pintauro.

The traditional Zeppole di San Giuseppe are fried, but many bake them in the oven.

Fortunately, they are a simple dessert that you can also make at home. Here are two recipes for you: one below from Repubblica, the other on the video.

The recipe of Zeppole

Boil the water with the butter, then add flour and salt and cook over low heat until you create uniform mixture.

Then, pour the mixture into a container and gradually add the fresh eggs until you get a dough that must be neither liquid nor too solid.

Thereafter, insert the dough into a pastry bag and create small donuts on a backing tray covered in baking paper.

At this point, prepare two pans with abundant peanut oil.

Dip the donuts in the first pan and wait until the donuts swell up. But be careful: the oil must not be too hot.

Then, fry the donuts in the second pan. Again, pay attention to the oil temperature, that must not be below 170°C (338°F). Pull the donuts out when they show a nice golden color.

Once cooked, put them on absorbent paper and wait for them to cool.

Lastly, decorate them with the custard, the black cherries and the icing sugar.

Are you planning a holiday in Italy? Book one of our villas on the Amalfi Coast.