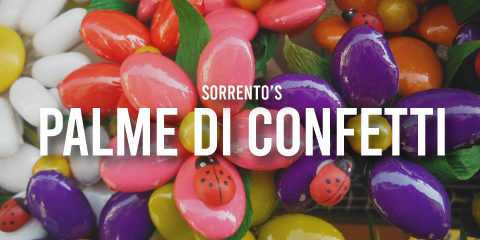 After Carnival comes Easter.
During the week preceding Palm Sunday, people of the Sorrento peninsula make Palme di Confetti (lit.: dragées palms). These creations looks like miniature branches, baskets or trees, but instead of real flowers they have dragées.

Usually, it is the women who make Palme di Confetti and distribute them among friends and relatives. Therefore, receiving or giving one is a gesture that expresses great affection.

In recent years, however, the tradition has spread more and more, and now it is easy to find these creations even in shops, but the production remains homemade.

Like the olive branches, the Confetti Palms also receive the blessing during the Palm Sunday mass.

THE ORIGIN OF PALME DI CONFETTI

A legend says that one day in April 1551, the people of Sorrento sighted several Saracen ships arriving. As the population prepared for a siege, a strong wind rose and the enemy ships sank.

The Saracens all died, except a young slave girl who was found on the beach by a local fisherman.

The fisherman took her to the church where, in the meantime, the Palm Sunday mass had begun. There, she offered some sugared almonds as a gift to thank for being alive.

At the time, no one in Sorrento knew about those candies, but they immediately aroused enthusiasm. Thus, the girl taught people how to prepare them.

Since that day, before Palm Sunday, families come together to work the confetti and create the small masterpieces.

‘Confetti’ in Italian is the name of dragées. These are small candies that have an almond covered with numerous layers of sugar.

Confetti can have different color to celebrate different events. Here are a few examples:

Nowadays dragées can be produced with other dried fruit or with chocolate, and flavored with different scents.

Well, if you buy a Palma di Confetti or a friend from Sorrento gives you one, you have two choices.
The first is to eat the confetti.
The second is to keep it like any other souvenir. In fact, confetti have the ability to resist over time without getting damaged.

Are you coming to Sorrento for Easter? Book a stay at one of our luxury villas.