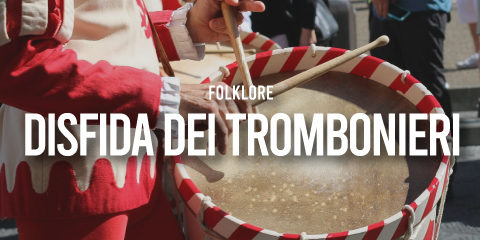 Every summer, the town of Cava de ‘Tirreni, near Salerno and the Amalfi Coast, hosts the Disfida dei Trombonieri, an event that mixes history and folklore.

The Disfida dei Trombonieri is a shooting competition that recalls the battle of Sarno on July 7, 1460. That day, King Ferrante of Aragon was surrounded by the troops of the Angevins and the rebels barons near Sarno. Fortunately, the people of the Cava de’ Tirreni decided to run to his aid. They not only saved him but also his reign. For this, on September 4, 1460, the King signed the Pergamena in Bianco, or Blank Parchment. This document, still preserved in the town, was blank, meaning that the people of Cava could write any request they wanted. The town was also granted privileges  and was never governed by princes and barons, always remaining under the direct dependencies of the Crown. For these reasons it became rich and flourishing.

The Disfida dei Trombonieri is a competition that involves 8 teams:

The team members are dressed like “trombonieri”, that is ancient soldiers armed with a weapon similar to the harquebus, the “trombone“. These tromboni are large mortar barrel guns, handed down from father to son. They are loaded with the wand and the wooden mallet, pushing some paper into the barrel to shoot blanks. The recoil is very strong, so it takes strength and technique to prevent the weapon from slipping out of hand with danger for oneself and for others.

The teams generally includes men only, although the team of S. Anna Scarico includes some women, in memory of their female ancestors who in 1799 defended the village of S. Lucia from the French advance.

Usually the Disfida dei Trombini takes place on the evening of the last Sunday of June in the municipal stadium. Each team must execute a battery, that is, a series of shots with the harquebus, in rapid succession, maintaining a constant pace and intensity, without missed shots. Before a battery, the team does a choreography, during which the they create geometric shapes. A jury of members of the other teams evaluate both the shots and the choreography. The winning team receives a silver facsimile of the Pergamena in Bianco as a prize.

WHY THE EVENT IS WORTH A VISIT

In other words, the Disfida is an excellent opportunity to discover the ancient history not only of Cava de ‘Tirreni, but of Italy. It is a fun event, involving local people and above all it is not yet that famous internationally, so it is still authentic. And during a vacation there is nothing better than discovering the true identity of the places you visit, don’t you think?

Are you planning a holiday in Italy? Discover our luxury villas on the Amalfi Coast.