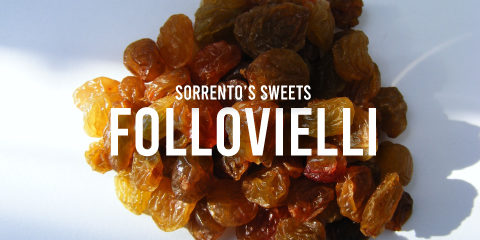 Follovielli, the Christmas sweets of Sorrento

Between November and January, people in Sorrento – and throughout the Naples area – prepare a typical Christmas dish: follovielli. These are citrus leaves (lemon, citron) stuffed with raisins and candied orange, and closed with raffia threads.

They are somewhat reminiscent of the dolma of Greece and Middle Eastern countries, although follovielli are sweet. Typically, they are part of the so-called sciosciole, that is, all the nuts and dried fruit that you can find on tables on Christmas Day in the entire province of Naples.

They are also called “follarelli” or “fogliarelli,” and regarding the etymology of their name there are several theories. Some say it comes from the Latin “folium volvere,” meaning “to wrap the leaf“. Others say it comes from “Follaro” (cocoon), which referred to either a wrapper or a coin struck in Sorrento around the year 1100.

This uncertainty about the name is also due to the fact that their origin is very ancient and dates back to the time of the Romans, who, however, used leaves of fig, plantain and vine.

There are several recipes for making follovielli.

The traditional one is long and requires weeks of work that includes reducing the must, cooking the raisins and leaving them to dry in the sun. However, since today few people have so much time, easier recipes are also available. For example, to prepare your own follovielli you have to:

Once ready, follovielli should preferably be stored in a container with a lid.

Although they are not as famous as other local foods in Sorrento, we recommend that you try them. And don’t worry, you don’t have to prepare them by yourself! You can find ready-made ones in the many local food shops in the town!

Do you want to visit Sorrento? Plan your trip and book a stay in one of our luxury villas.!

Ghosts, monsters and curses; the mysteries of the Sorrento Coast
7 November 2022

The Wine Route on the Sorrento Coast
10 October 2022