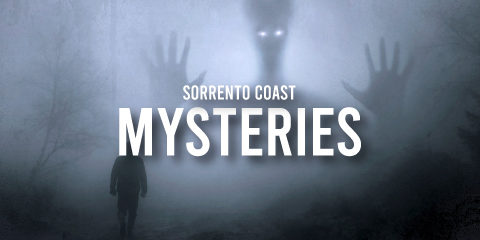 On the Amalfi Coast, the sun shines for most of the year and temperatures are never too cold in winter. However, Halloween has just passed and November is a month in which dark atmospheres are not lacking. That’s why in this article we will tell you about some mysteries of the Sorrento Coast and its surroundings, which go beyond the well-known myth of the sirens.

3 mysteries of the Sorrento Coast

1) The curse of Villa Nicolini

The first of the mysteries of the Sorrento Coast is set in Sant’Agnello, in the Cappuccini district. A short walk from the famous Hotel Cocumella where even Lord Byron stayed, is Villa Nicolini.

This charming villa was built in 1920 by Giovanni Nicolini, a sculptor from Palermo, who later sold it. Since then, the villa went through a stormy period, passing from hand to hand and ending up in semi-abandonment. Among the various owners were the Capuchin friars, at least until the municipality expropriated the villa. It is said that the friars did not take the eviction well and therefore cast a powerful spell against whoever bought the villa.

When the Parlato family bought it an incredible fact happened.
The landlady wanted to renovate the garden by changing the position of the statue of St. Francis, but the master builders, remembering the legend about the spell, tried to change her mind. Unfortunately she insisted and suddenly she died.

Recently the mansion became the property of Russian tycoon Jorgy Banjamov, who then was arrested for bankruptcy. It may be just a coincidence, but superstitious people think it is the effect of the friars’ spell.

2) The sea monster of Sorrento

In Sorrento, inside the church of Sant’Antonino, you can see a huge tusk of an animal similar to that of an elephant.

A legend says that that tusk actually belonged to a sea monster that, a long time ago, came out of the sea and attempted to swallow some children playing on the beach. The children were saved by the apparition of Sant’Antonino who killed the monster. And the fang is what remains of that episode.

3) Castle Giusso and the ghost of the queen

The third of the mysteries of the Sorrento Coast concerns the lovely Castello Giusso, in Vico Equense.
Located overhanging the sea, Castle Giusso is a wonderful place for admiring a breathtaking panorama. However, apparently the castle is haunted by the ghost of Queen Joanna I of Naples.

According to legend, the queen used to have many lovers but she usually eliminated them as soon as the night of passion was over. She would kill them by poisoning or by laying traps in the halls or corridors of the castle.
Many people swear they saw the queen’s ghost wandering through the rooms and corridors. Moreover, especially in August, they say that the wails of the souls of the unfortunate lovers can be heard rising from the chapel of Castle Giusso…

Do you want to visit these places? Plan your trip and book a stay in one of our luxury villas near Sorrento!

The Wine Route on the Sorrento Coast
10 October 2022