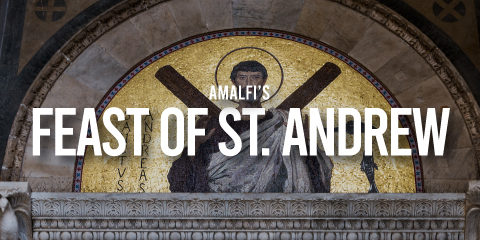 JUNE 27, THE FEAST OF SAINT ANDREW IN AMALFI

Generally cities and states celebrate their patron saint once a year, but things are different in Amalfi. In fact, the Feast of Saint Andrew (Festa di Sant’Andrea), patron saint of Amalfi, falls twice a year: on November 30 and June 30! Strange, isn’t it? Let’s find out more.

Feast of Saint Andrew in Amalfi: why two celebrations?

Andrew (Andrea) was an apostle of Jesus Christ and brother of Peter. His relics were transferred to Amalfi in 1208 by Cardinal Pietro Capuano after the conquest of Constantinople by the Crusaders, and are still in the crypt of the Amalfi Cathedral.

Although the Catholic Church celebrates Sant’Andrea in November, Amalfi also celebrates it in June to commemorate a historic event. In fact, on June 27, 1544 the corsair Barbarossa was about to attack Amalfi but a storm stopped him and people believed it was Saint Andrew’s intervention.

The race up the stairs of the Cathedral of Amalfi

On the occasion of both celebrations, people of Amalfi carry a silver sculpture of Saint Andrew around the town to the beach, where the fishermen are blessed. Then, the procession goes back to the Amalfi Cathedral but before entering it something particular happens every time. Instead of walking, the bearers race up the stairs of the cathedral.

This custom dates back to the late 1940s. At the time, the Monsignor of Amalfi forbade the procession to reach the beach, considered an inadequate place for a religious event. This created discontent among the inhabitants and that year the procession was forced to accelerate its pace right in the vicinity of the Cathedral to avoid hostile actions. Incredibly, the race became a constant even in the next editions, even if there was no longer a reason to do so.

Today, the race up the stairs of the Amalfi cathedral is a spectacular moment. The bearers, all dressed in red, run up while Rossini’s march ‘Moses in Egypt‘ plays in the background and the crowd cheers them on. Finally, when they reach the top of the stairs, the whole square explodes in loud applause.

The miracle of Manna

On the eve of the Feast of Saint Andrew, people of Amalfi await another event: the miracle of manna.
Usually manna is a dusty or grainy substance found near the tomb of Saint Andrew in the Cathedral of Amalfi. However, in the days of the Feast of Saint Andrew, this substance turns into an oily liquid.
Apparently, this miraculous phenomenon occurred for the first time on November 29, 1304. According to a legend, that day an old pilgrim discovered the liquid before mysteriously disappearing. This led people to believe that he was Sant Andrea himself. Furthermore, the legend says that the miraculous liquid restored sight to a blind man. For this reason, the liquid is still distributed to the faithful today.

Why participate in the Feast of Saint Andrew in Amalfi?

The Feast of Sant’Andrea is one of the most loved events by Amalfi people. It is an excellent opportunity to admire the Cathedral of Amalfi and the splendid bronze statue of the apostle Andrew. Furthermore, the Feast is enriched by marching bands, fireworks and minor events. In conclusion, it is a great momento to discover some local traditions.

Do you want to visit Amalfi? Discover our luxury villas on the Amalfi Coast.