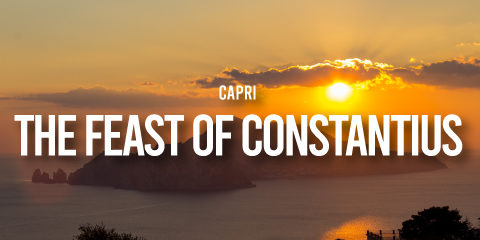 The Feast of Constantius, Capri

Although the processions on the Amalfi Coast are typical of the Easter period, every 14 May Capri is the backdrop for the Feast of Constantius of Capri and the procession of the same name.

WHO WAS CONSTANTIUS OF CAPRI

Constantius of Capri, or San Costanzo, is the patron saint of Capri and was bishop of the Catholic Church. Unfortunately, his life is quite a mystery. However, a legend says that he arrived and lived in Capri in the 7th century AD.
While he was sailing from the Eastern Mediterranean, a storm destroyed the ship and he was shipwrecked on Capri. The inhabitants welcomed him and he became a point of reference for the community. When he died, they buried his remains in the church near the port of Marina Grande, which from that moment became the Church of San Costanzo. Today his remains are partly in the church of Santo Stefano and partly in the crypt of San Guglielmo.

But the devotion of the people of Capri to San Costanzo is due to a miracle he performed in 991 AD. At the time, the Saracens threatened Capri after hitting Amalfi. While the island was waiting for the attack, an old woman unable to escape was waiting her fate praying at home. Suddenly she saw an apparition: two soldiers, San Costanzo and San Severino (first patron of Capri) told her who they were and that the Saracens would be expelled. Just after saying that, the sea became rough and a storm destroyed the attackers’ ships.

THE FEAST OF CONSTANTIUS OF CAPRI

The Feast of Constantius of Capri is one of the most important traditions of the island.

For the occasion, the bell tower and the Piazzetta are illuminated a few days earlier, while a painting depicting the religious defending the island is hoisted in Piazza Umberto I. However, the main event is the procession, during which people carry the statue of the Saint from the Church of Santo Stefano to that of San Costanzo in Marina Grande.

During the procession all the inhabitants pour into the street, throwing flowers towards the statue, while the musical band plays traditional music. Eventually, they place the statue of Constantius of Capri in the Church of Marina Grande for a week. After that, a second procession takes it back to the Church of Santo Stefano.

But the Feast of Constantius of Capri is not just a religious event. After the procession, people gather together at the seaside village of Marina Grande to party. Finally adults and children can enjoy music, stalls, food and the company of friends and family.

Undoubtedly, the Feast of Constantius of Capri is a great moment of joy and socialization. In addition, it is an excellent opportunity to find out more about the history and traditions of Capri.

But, there is more. Capri in May is beautiful! The temperatures are warm, flowers bloom everywhere, and there is not yet the summer mass of tourists. In short, it is the perfect time to discover this wonderful island and the nearby Sorrento Coast in complete calm.

Do you want to visit Capri? Take a look at our luxury villas on the nearby Sorrento Coast.