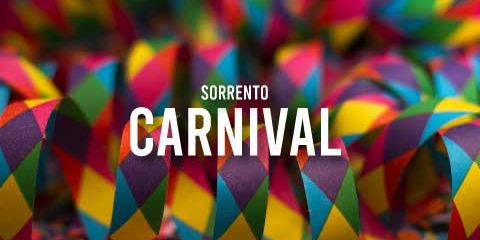 Even though the most famous carnivals of Italy are those of Venice, Viareggio, and Ivrea, the Carnival in Sorrento has its charm too.

The fact is that carnival is a very popular festival throughout the Amalfi coast and the Sorrento peninsula. Each town has its own event calendar which generally includes masked balls, music shows, allegorical floats and parades. The Carnival of Maiori and that of Termini, a fraction of Massa Lubrense, are particularly famous.

Why is Carnival so popular?

Carnival follows Christmas and precedes Lent. The latter is a long period of renunciation and sacrifices that precedes Easter. For this reason, since ancient times, Carnival offers a last chance to celebrate opulence and even waste. In fact, the custom of throwing confetti and streamers resumes from the act of throwing thing away.

The ancient tradition of A ‘morte’ e Surriento

The origins of Carnival in Sorrento are lost. However, some memories about the old traditions are still alive.

One of these is A ‘morte’ e Surriento, that is the Death of Sorrento.

It was a sort of show staged near a city gate demolished in 1863.

– the first was a skeleton with a scythe, representing Death,

– the second was a fat man, representing Carnival,

– the third was a thin and battered old woman, representing Lent.

At precisely midnight, Lent and Carnival puppets met right under the gate. There, was Death waiting for them. After Death struck Carnival with its scythe, the inhabitants of Sorrento tore the puppet of the fat man to shreds and burned it. In the meantime, the puppet of Lent entered the town for good.

A ‘morte’ e Surriento was an extremely popular event not only in town but in the entire surrounding area, so much so that it became a saying. A ‘morte’ e Surriento in fact is still used today to describe particularly tall and thin people who, in some way, resemble the puppet of Death.

Unfortunately, the custom was abandoned at the end of the 1700s, when the French banned it. Today people celebrate the carnival in Sorrento in a less picturesque way, with parades of allegorical floats, shows and a big party on Shrove Tuesday.

WHAT TO EAT DURING THE CARNIVAL IN SORRENTO

Spending Carnival in Sorrento allows you to discover some of the traditions of the town, but also the local cuisine.

The typical Carnival dishes are more or less the same that you can find in other Italian regions. Most of them are sweets. For instance:

Among the typical dishes of Sorrento is the Carnival pizza which, despite its name, has nothing to do with pizza. In fact, it is a savory pie with eggs, cheese and sausage, often accompanied with pan-fried broccoli. It’s really good!

Are you coming to Sorrento? Book a stay in one of our villas in town!