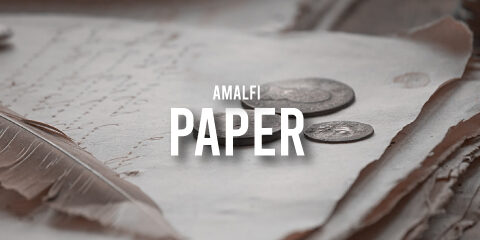 Amalfi paper: a souvenir with a long history

Amalfi paper is a simple, easy to carry and yet full of charm souvenir, great not only for those who love to write or paint. In fact, the long tradition of papermaking has long been the main industry (and pride) of the town of Amalfi. Let’s find out more!

The history of paper in Amalfi

We know that the Chinese invented paper in the 2nd century AD using mulberry bark and bamboo. Later, the Arabs modified the production technique, replacing bark with cloth. The Amalfitans learned the art of paper making from the very Arabs, with whom they had trade relations, and in a short time numerous paper mills sprang up in the town, particularly in the Valley of the Mills, where the Canneto River flows. In fact, water played a key role in papermaking, both as an “ingredient” and as a source of energy to drive simple machinery. Despite this machinery, the entire process of paper making was always done by hand using old rags of linen, cotton, hemp, or jute, which were shredded and reworked into a pulp along with water, then filtered and put to dry.

After that moment, due to the industrialization, Amalfi’s manual paper production gradually became less and less competitive. Also contributing to the decline of the paper industry were poor connections to the Valley and the lack of a steady flow of water. The final crisis came in 1954. That year a flood hit Amalfi and only a few paper mills survived. Two names are Amatruda and Milano paper mill, which now houses the Amalfi Paper Museum.

The characteristics of the paper

Also called bambagina, Amalfi paper is a high quality paper. This quality is due to the fact that, unlike ordinary paper, it is produced from the maceration in water of textiles.

Since it is a handmade product, the edges of the sheets are usually naturally frayed and its ivory color depends on the materials, since its production does not involve the use of bleaching agents. In addition, the sheets generally have the manufacturer’s watermark visible in transparency. To date, only the Amatruda paper mill is still in operation in Amalfi.

While in the past the Amalfi paper was used for official documents of the Amalfi duchy, the bishoprics, in the courts of the Angevin, Aragonese, and Bourbon families, today it is most used for wedding invitations and important artworks. Even the Vatican State uses Amalfi paper for its correspondence.

The Amalfi Paper Museum is one of the few museums on the Amalfi Coast. It is located inside an old paper mill dating back to the 13th century. The museum houses original, fully functional, machinery. Some examples are the multiple hammer machine that shredded fabrics, or the presses to remove excess water. All of these machines are still able to work thanks to the water of the Canneto River.

Are you planning a holiday trip? Discover our luxury villas on the Amalfi Coast.