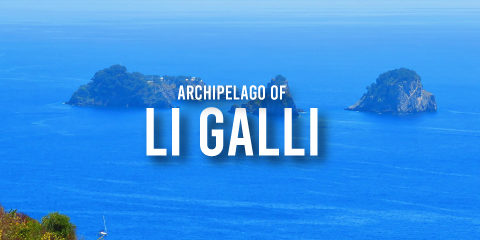 The Sirenusas, or the Li Galli archipelago off the Amalfi Coast

Facing the Amalfi Coast, not far from the island of Capri and the town of Positano, is a small archipelago that has two different names: Li Galli and The Sirenusas. These huge rocks rising out of the sea are one of those fascinating places that you should visit during your holiday.

Li Galli or The Sirenusas? Why two names

The first name, “Sirenusas,” was given to the islands by the Greeks, who were inspired by the legend of the Sirens. Indeed, they believed that these creatures lived in the archipelago, luring sailors with their song and then killing them. However, in Greek times, mermaids were not depicted as sirens, with the head and torso of a woman and the tail of a fish, but as bird bodies and human heads.

The archipelago’s other name, Li Galli, means “the roosters” in Italian. This name was given by the Italians because the shape of the islands resembles that of roosters.

The Li Galli archipelago is made up of three small islands:

In ancient times there was a fourth island, called Ariana, which later disappeared due to erosion. Today, around the three main islands are smaller islets such as Isca, closer to the coast, and, further away, the prominent rocky outcrop of Vetara.

The Sirenusas have always been a place of great interest, not only for their natural beauty but also for the many shipwrecks that have occurred in the area over the centuries. The most famous is probably the one involving Ulysses, the hero of Homer’s Odyssey.

Frequented by the Romans, in the Middle Ages the islands became fiefdoms of Emperor Frederick II.

Over time, Gallo Lungo housed a monastery and a prison. In the late 13th century, a watchtower was built there to control pirate raids. Later, in 1848, a family of counts built a rabbit farm there. Unfortunately, a few decades later, a terrible storm killed all the animals, and the islands became only a place for quail hunting.

However, in 1924 the Russian choreographer and dancer Léonide Massine bought the archipelago and had a wonderful villa built there, to which the architect Le Corbusier also put his hand. The property then passed in 1989 to another famous Russian dancer, Rudolf Nureyev. After his death, a company bought the archipelago, which today belongs to a single owner.

Despite being a private property, it is possible to admire the Li Galli archipelago on a boat trip. The best way to reach it is with a boat tour from Amalfi or Positano.

Why you should go. Because the view of the Amalfi Coast and Li Galli islands is wonderful! Moreover, they are part of the enchanting Punta Campanella Marine Protected Area.

Do you want to visit Amalfi? Discover our luxury villas on the Amalfi Coast.

The Chestnut Festival of Scala
3 October 2022