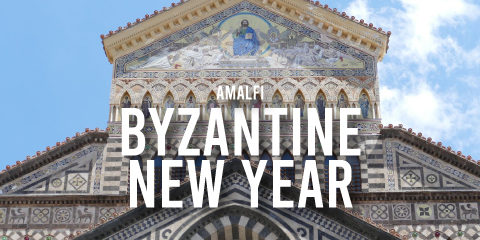 The Byzantine New Year in Amalfi and Atrani

On August 31 and September 1 the towns of Amalfi and Atrani become the set of the historical re-enactment of the Byzantine New Year.

The Byzantine New Year marked the beginning of the fiscal and legal year during the Eastern Roman Empire. At that time, the towns were lively and flourishing, as the history of the Duchy of Amalfi demonstrates.

Today, the historical re-enactment takes Amalfi back in time and gives citizens and tourists the opportunity to participate in fascinating events.

EVENTS OF THE BYZANTINE NEW YEAR ON THE AMALFI COAST

The main event of the Byzantine New Year in Amalfi is the Historical Parade, which is attended by over 100 figures in medieval costumes.

Ladies, knights, and pages parade along the path that leads from Amalfi to the churchyard of the San Salvatore de ’Birecto Chapel in Atrani. Once there, in the atrium of the Palatine chapel and in the presence of the Archbishop, the Coronation of the new Magister of Amalfi takes place. During the Byzantine Empire, the Magister was an important figure for the city. And in fact, even today Amalfi assigns this title to a person who stood out in one of the sectors that made the town so important in the past. This person must be a citizen of Amalfi, but may also be born somewhere else.
The Coronation of the Magister follows a ritual handed down since 839. Immediately after, always accompanied by the imposing procession, the Magister reaches the suggestive staircase of the Cathedral of S. Andrea in Amalfi for the official presentation to the people.

Of course, during the Byzantine New Year, Amalfi hosts many other events. These include conferences, concerts, square parties, and food stands.These are all excellent opportunities to socialize and discover more of the history and traditions of this charming town.

THE TOWNS OF AMALFI AND ATRANI

Amalfi is a town near Salerno and Naples, in Italy. It is one of the most important towns on the Amalfi Coast, famous all over the world for its natural beauty, rich history, and great food tradition.

Amalfi was founded by the Romans around the 9th century BC and became an important maritime town during the Middle Ages. Unfortunately, in 1343 it was completely destroyed by a powerful earthquake. Despite this, Amalfi managed to recover and today is once again a thriving town. Amalfi is home to numerous historical and cultural sites, such as the Cathedral of S. Andrea, the Church of S. Maria dell’Avvocata, and the Cloister of Paradise. You can also take boat trips from Amalfi to nearby places such as the Island of Capri, the town of Positano, or the archaeological site of Pompeii.

The town of Atrani is close to Amalfi, so close that you can reach it on foot! This proximity is the reason why Atrani shares the same history as Amalfi. Among the historical and cultural sites in Atrani are the Church of Santa Maria Maddalena, the Church of San Lorenzo, the Cloister of Paradise, and -of course – the Church of San Salvatore de’ Birecto.

Are you coming to one of these towns? Discover our luxury villas for rent on the Amalfi Coast.